What a turn out! Thank you, Everyone, for joining us!

On December 1, more than one hundred people – friends, students and teachers – joined together to celebrate how this luminary, a man who many of us call Guruji, has touched and transformed us. Laughter, tears and surprises filled the evening as four teachers shared their stories of working directly with Guruji. A little known and superb documentary, “Atma Darshana”, along with a raffle and carrot birthday cake completed the diverse program.

“Yoga is an art, a science and a philosophy. It touches the life of man at every level, physical, mental and spiritual. It is a practical method for making one’s life purposeful, useful and noble”.

So begins Sri B.K.S. Iyengar’s forward to his book Light on the Yoga Sutras of Patanjali.

On Friday, December 14, students all over the world will acknowledge the grace and gifts that this man left in his wake. At Iyengar Yoga Institute of Los Angeles, we celebrated early!

“Atma Darshana” was produced in 2002 by a local yoga student and documentary filmmaker, Diane Estelle Vicari. This film was not made available then and is still difficult to find, so it was a rare opportunity for us to view the film.

Drawing on archival film footage, interviews, photographs and intimately narrated by Geeta Iyengar, this documentary captures the essence of Yoga Master BKS Iyengar. Filmmaker Vicari studied with senior-certified Institute teacher, Anna Delury, when she considered making this film. Following the showing, a humble Vicari answered questions and said that she would, with the help of Institute teachers, try to revive the film for future viewings.

Teacher Leslie Peters modeled for “Iyengar Yoga: The Path to Holistic Health.” She recounted the extraordinary experience of working eight hours a day with Guruji and Geetaji to capture the images for this book. Fashion in India was much more reserved in the late 1990s, and Leslie was the sole western model. She was asked to wear a sleeveless two-piece outfit and felt very exposed. A crowd of young gawkers gathered to observe until Iyengar, to Leslie’s great relief, chased them all away. Over long hours, Iyengar worked closely with her to capture the intricacies that are characteristic of Iyengar yoga. The book, along with some archival images from the photo shoot, are on display at IYILA.

Koren Paalman also teaches at IYILA. At the age of three, Koren had open-heart surgery with only a fifty-percent change of survival. She explained that the surgeons had to break her sternum to successfully complete the surgery, then wired her sternum back together. She first visited the Iyengar Yoga Institute in Pune to attend medical class in 2002, then returned biennially for four more visits. Her story and the images that she showed were truly moving. And the transformation of the shape of her chest was visceral! We could all breathe easier after merely seeing the photos.

The Institute’s founder, Scott Hobbs, is a smart and funny man. He told us the terrifying and exhilarating experience of teaching in front of B.K.S. Iyengar in 1984, and how this event sparked the birth of our Institute.

“How young we were then!” Lisa remarked, upon seeing a photo of a svelte and blond Hobbs doing full arm balance – Adho Mukha Vrksasana. After the class, Scott explained, he took Guruji and his entourage to Disneyland, where Iyengar loved riding the roller coaster!

Lisa Walford closed the evening with the poignant story about her first informing Iyengar of her HIV+ status in 1997; this after having first attended classes in Pune in 1986. Infected in 1985, her health, she told us, had begun to deteriorate substantially. The general public was quite phobic about the epidemic and Lisa was the first woman to work directly with Guruji. She showed pictures of the sequence she practiced and explained that her target pose was Uttana Padma Mayurasana (Light on Yoga p. 233). It was another three years before good medical cocktails to treat HIV were available. While she began treatment in 2000, it was due to Iyengar’s support that she was able to keep her immune system strong until then.

The raffle prizes varied from yoga props, signed copies of Light on Life, to gift certificates to local restaurants and private yoga classes. Elated raffle winners left pleased and all those who purchased tickets knew that their contributions would go to furthering the teachings of Iyengar yoga, and to supporting our local community.

Many pranams (salutations and thanks) to those who donated for the raffle and to those who purchased tickets. Your contributions help us maintain the Institute and to bring quality instruction to everyone.

UPDATE TO OUR CLOSURE

The Institute is Temporarily Closed 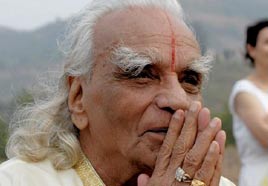 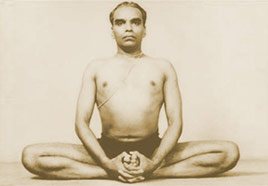 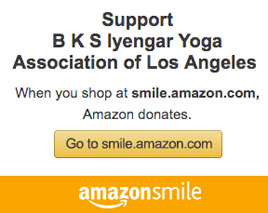